Pine Bush High School’s Odyssey of the Mind Theatrical Team is heading to worlds! Yes, the team that consists of Georgia Camacho, Victoria Knight, Korrina Poindexter, Madelyn Carpenter, Meryl Palinkas and James Sheeley and is coached by Bobbi Walter and Dan Aktas, finished second in their division at the state competition, which gives them a ticket to worlds, and also received the Renatra Fusca Award for creativity. 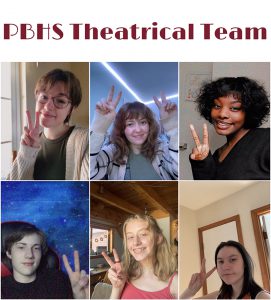 The Renatra Fusca Award goes to teams or individuals that demonstrate outstanding creativity. Receiving the award is like getting “the golden ticket,” according to Coach Aktas, because you go on to the next round with it.

The award was created early on in the Odyssey years, as senior Korrina Poindexter explained. A team that competed in a problem that required them to create a boat that gets across water in a creative and fashionable manner had built a boat that imitated a Renatra Fusca, a bug that can walk across water. Unfortunately the boat sank before making it to the other side. But the judges were amazed by the team’s creativity and decided to let them move on to the next competition, giving them the opportunity to try again and fix the problem. That’s how the award came into being and it was named after the team’s creature. The Renatra Fusca Award embodies all that the Odyssey of the Mind program represents. By the way, Korrina has been on two teams at Pine Bush High School that were awarded this honor.

Team member Georgia Camacho, a senior, received a $750 scholarship from New York State Odyssey of the Mind Association. She has participated in Odyssey for seven years, since sixth grade, and absolutely loves it and all of the coaches who have been part of her journey. She described herself as “a skit-heavy person” leaving the technical stuff to her teammates. She writes and acts in the Odyssey skits.

“I really love Odyssey,” Georgia said. “The people I’ve met are some of my favorite people. I’m so glad to have had this program and that Pine Bush has supported it for so long.”

“Faced with a child’s tantrum, the team creatively explains how she got there and how things were resolved in an innovative manner,” according the judges at the New York State competition. ”From messy impulsive actions to a ‘brain Freeze,’ ‘lobal warming’ and then finally ‘brain washing’ to clear out the cognitive mess. A unique and creative humorous solution was enjoyed by all.”

This team actually had the highest number of points in their division for their skit, so they won’t be changing anything about that in preparation for worlds, which will be virtual as was the region and state competitions. Coach Aktas said they will use the time between now and the world competition in May to improve on their spontaneous skills. Their skit was so entertaining – have a look!

Best of luck to our PBHS Odyssey of the Mind Theatrical Team!