Pine Bush High School hosted its official renovation kick-off April 27 after receiving a $250,000 grant from the Gene Haas Foundation. The grant will go toward the Gene Haas Innovation Center at PBHS, the first of its kind in any high school in the country. 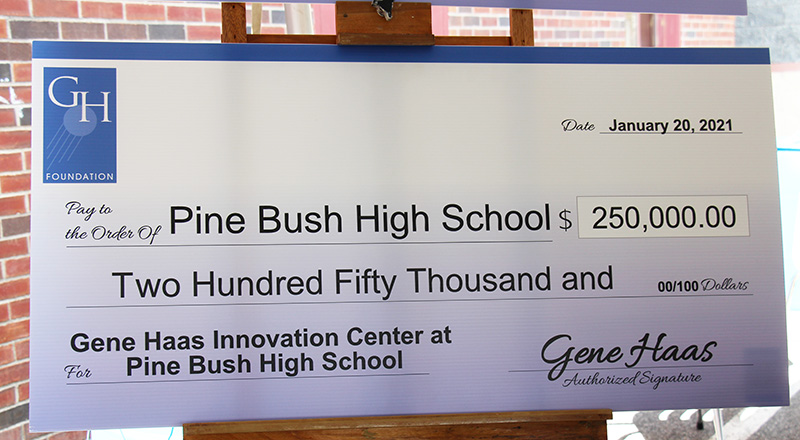 The renovation will double the square footage of the school’s science, technology, engineering, art and math (STEAM) area.

The kick-off included a tour of the current STEAM facility as well as demonstrations of the equipment by PBHS students. Educators, politicians and many advanced manufacturing partners were on hand to show their support, including Kathy Looman representing Haas.

“I fell in love with manufacturing after getting a part-time job to help me qualify for a mortgage,” Looman told those assembled at the outdoor tented event at Pine Bush High School. She switched careers to manufacturing shortly after and ran the operation where she worked for 16 years. She worked with the Society of Manufacturing Engineers for a few years and then went into the philanthropic side of the industry with Haas. 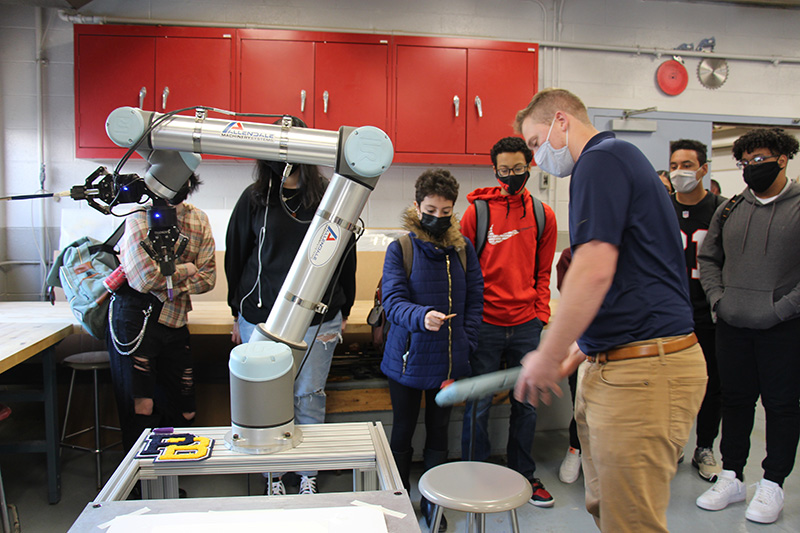 “I wanted to get industry and education to talk to each other,” she said, noting there weren’t enough people trained to do the highly technical jobs. And she has done just that.

As part of Haas, she provides scholarships and grants to schools with manufacturing programs. Often she finds passionate people but without the infrastructure to support the program. Here at Pine Bush, she has found both.

Principal Aaron Hopmayer reached out to Looman five years ago, requesting scholarship money through a grant application. He received $5,000, but more importantly, the relationship between Pine Bush and Haas began. Pine Bush has received scholarships from the Haas Foundation every years since, including $14,000 this year.

“Our program develops career pathways,” Hopmayer said. “Our students develop skills and earn credentials that qualify them for immediate employment or to go on to post-secondary education.”

Hopmayer thanked the many partners who helped build the program here at Pine Bush, including Marty McGill from Allendale Machinery Systems, Harold King of the Council of Industry, John Yelle of Pratt & Whitney, and many others.

“Pine Bush students are being prepared here,” said McGill. “It’s Hop’s passion and Kenny Marshall’s creativity and ambition that have put us here.”

“Today is significant,” said Tim Mains, superintendent of Pine Bush schools. “We were planning to expand the program, piece by piece. This money allows us to do what we wanted to do with the program facility now. We will add four more classrooms, doubling our space for manufacturing. This program directly benefits our students here at Pine Bush High School and I thank you on their behalf.”

The Gene Haas Foundation was established in 1999 by Haas Automation, Inc., founder and CEO Gene Haas. He first provided grants to the local community through non-profit organizations. When he saw a growing need for skilled manufacturing employees, he expanded the foundation’s mission to include support for manufacturing training programs. The foundation has provided more than $100 million in grants since its inception.

What folks are saying:

“This new facility will show there are so many paths to success.”

“It’s incredible to have a program like this in a high school. Today, you’ve planted a flag here in Pine Bush. You are the leaders.”

“Pine Bush is a model for how high schools can work with industry to help fill the skills gap.

“Today’s renovation kick-off is about meeting the manufacturing and technological challenges of the future with big ideas and bold moves. It is also about recognizing the importance of developing robust in-school technology career programs like Pine Bush High School’s Advanced Manufacturing Program to prepare students for the jobs of today and tomorrow.”